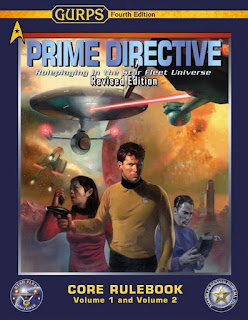 First created for GURPS Third Edition this is a Powered by GURPS product.  That means its a complete game, and one that is fully compatible with GURPS. So GURPS players wont need to learn a new system to play in the Star Fleet Battles universe, and those not familiar with GURPS will have a complete and battle tested (Fourth Edition was published in 2004, the original system published in 1986) game system.
Currently PDF only, a hard copy is expected early next year the book is on W23 as Volume 1 Creating a Character, Volume 2 Playing the Game, and a bundled Vol 1 & 2 set.

This is not really Star Trek but its as close as your likely to get!
Based on the Star Fleet Battles wargame this adds a roleplaying option in a non canon Star Trek universe. Its a lot like the Star Trek animated TV series if your familiar with that.

Included is information on most of the Alpha Quadrant, with of course all you need to play a Star Fleet character.  Even medals and promotions are include for the up and coming officer!
Templates speed character design, a nice feature - though of course custom characters are still available.

One of the new things is a chapter on space combat which can be used or experienced GURPS players can work with the standard GURPS space combat system using the GURPS Spaceships line, adding options to build new ships with different technologies to throw a curve at your players. From Precuser tech to cross setting scenarios.
Not to fret if you dontwant to design a ship right away as included are several ships, including large freighter, Free Trader (with Deck plans!), security skiff, Federation heavy cruiser, Klingon D7 battlecruiser, Romulan War Eagle, Kzinti command cruiser, Gorn Allosaurous Battlecruiser, Tholian patrol corvette, Oriion Pirate light cruiser, and the standard administrative shuttlecraft.
An adventure "Rescue on Roon" is also included.

Email ThisBlogThis!Share to TwitterShare to FacebookShare to Pinterest
Labels: GURPS