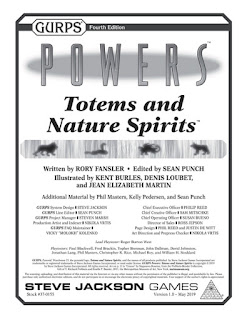 Its been a long road but this is my first GURPS book, though hopefully not my last.
This was originally part of a much larger book, but Steven Marsh wisely suggested a smaller book for my first time. In my mind shaman and spirits are given short shrift in most RPGs in that spirits are mostly things to fight and shaman are typically just another spell caster. GURPS has the structure to do so much more and we have seen glimpses but I wanted more for my favorite system.

The Totems, there are a decent amount included, I only had to cut one from the playtest draft (rat) which was a nice urban type totem but replaced it with Dragon and Nymph at the request of the play testers who wanted more non animal totems. There a bunch of notes for others that did not get a writeup, just some short notes on their aspects.
The play testers were great, especially William Stoddard and Jon Lang who kept the discussion on the power modifier going a few days after it officially closed. They had specific concerns and because they were willing and able to discuss them objectively we managed to come up with a rewrite that hopefully works for more people than the original.

Going into this I knew I would get requests for additional totems (Octopus was one such), expected to get some recommendations to cut, and was expecting (and received) requests for more detail and lore on certain favorites. However the goal was to get in as many worked examples as possible and cover several professions and character needs.
Overall that part went better than I expected, for those familiar with the subject a lot of this can be very personal.

The Role section was added during the review and let me keep more totems than I expected and do a better job of helping GMs and players make new totems. It adds an extra step but I think keeps complexity to a minimum.

Drafts, I actually did rewrites and sent them out daily the first week.  Most would not do this, but it helped the manuscript was short and it helped me track word count and turn in the final draft faster by editing in virtually real time instead of after the test. The only playtest I have participated in that was similar was GURPS Technical Grappling where it was important to the author we saw changes quickly for improved feedback.
I tried to make it as painless as possible by noting the changes in each draft from the previous one.

Primarily this is a book of templates and lenses and no new rules. However I created some new modifiers, including one that addressed something I have wanted in GURPS since GURPS Lensmen!
Also added were some skill and advantage clarifications. Overall I think its pretty crunchy but still has plenty of flavor. But that is the authors opinion, whats yours?

What was changed or cut?

In the end the presentation had the most changes, with sections of text being moved around, a few things were deemed redundant and cut, other sections reworded for clarity.
The Power modifier and a few advantages received some feedback and changes but in the end they came out as I wanted but better written due to the feedback. The Role change was a nice addition and saved a lot of repetitiveness. That saved a lot of word count but also makes an easier read. The old way each Totem was a larger wall of text, good for fast reference but not as pleasant to read in my opinion.